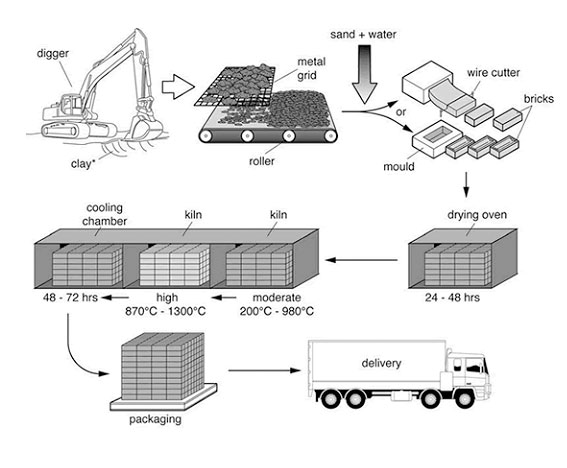 The diagram explains the way in which bricks are made for the building industry. Overall, there are seven stages in the process, beginning with the digging up of clay and culminating in delivery.

To begin, the clay used to make the bricks is dug up from the ground by a large digger. This clay is then placed onto a metal grid, which is used to break up the clay into smaller pieces. A roller assists in this process.

Following this, sand and water are added to the clay, and this mixture is turned into bricks by either placing it into a mould or using a wire cutter. Next, these bricks are placed in an oven to dry for 24 – 48 hours.

In the subsequent stage, the bricks go through a heating and cooling process. They are heated in a kiln at a moderate and then a high temperature (ranging from 200c to 1300c), followed by a cooling process in a chamber for 2 – 3 days. Finally, the bricks are packed and delivered to their destinations.